And it is GORGEOUS!!! I pre-ordered it from The Writing Desk UK, who I’ve purchased limited edition Lamys from in the past when I was too impatient for them to get released in the US. They have affordable prices and reasonably quick shipping to the US. And I just received this new Precioussss in my mailbox last night!!! Read on for some pics of this luscious pen in it’s full glorious coppery glory!

First of all, the pen came well packaged from The Writing Desk. Surprisingly, the pen came double boxed. Usually, Lamy pens have come to me two ways: 1) in the “slotted” gray cardboard box, with the pen clipped to a cardboard sleeve inside, or (which I’ve seen much less often) 2) in a plastic/vinyl pouch. This time, the pen came in a slim gray box packaged inside the normal gray slotted box, as shown below.

And then the color pops out and embraces your eyeballs! What a beautiful glowing shiny copper color.

The feed is the standard Al-Star smoky feed (compared against the 2009 LE Lamy Safari Orange just for the heck of it): 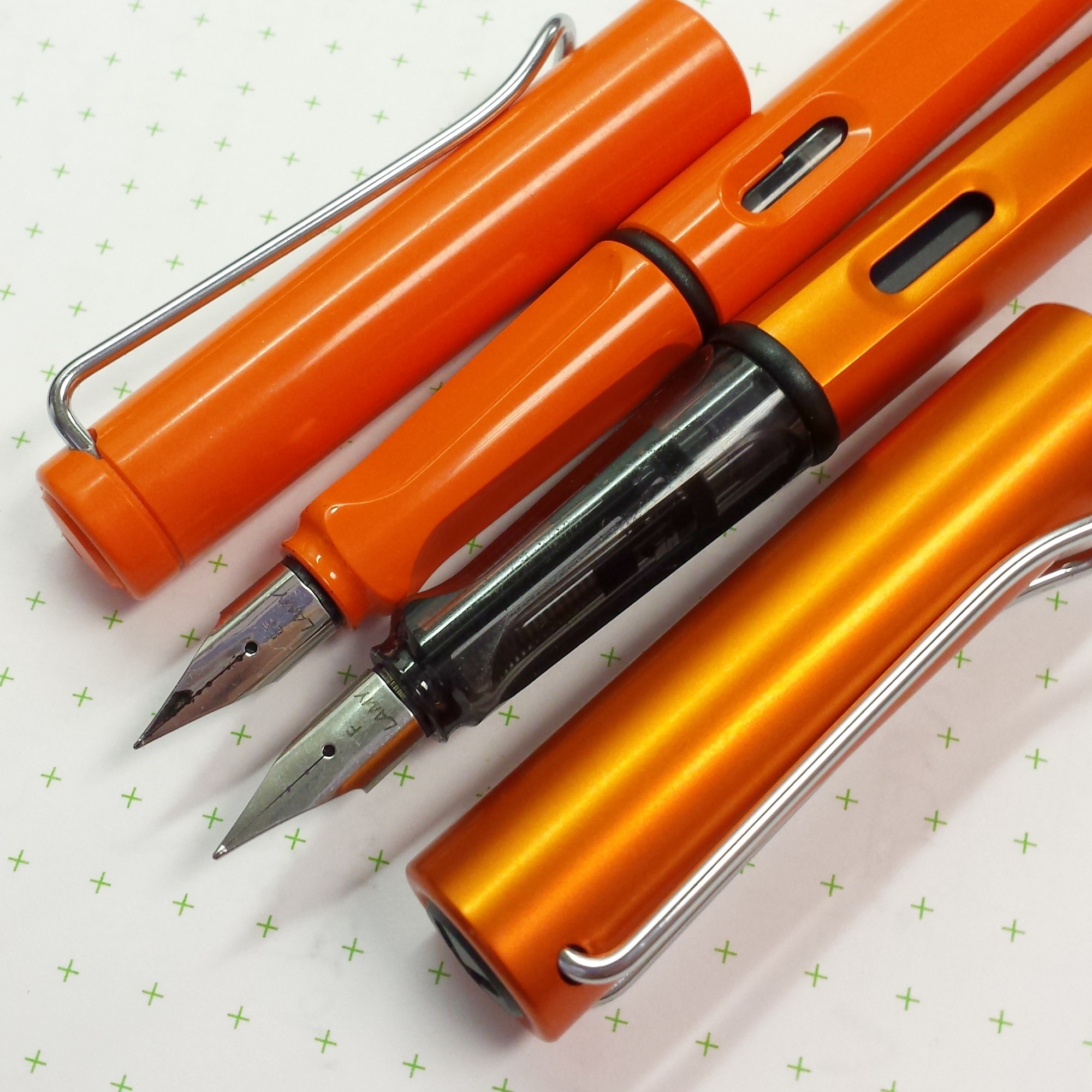 The nib is the trusty Lamy workhorse Fine, if you’ve used Lamys before you know while EF nibs can be tricky, the F nibs are almost universally good smooth writers.

Along with the new 2015 Copper Orange Al-Star, Lamy also released a new limited edition Copper Orange ink in both bottled and cartridge forms. The Writing Desk didn’t have them available when I pre-ordered my pen, so I’ll just pick it up later when it’s more available here in the U. S. In the meantime, I popped a Lamy Violet cartridge in to test it out. It’s a fun contrast to the orange!

Next, because comparisons are always useful! The new 2015 Al-Star vs the 2014 Lamy Safari Neon Coral and 2009 Orange limited editions. First, the yummy yummy color – just looking at this makes me incredibly happy:

And full-length side by side view: 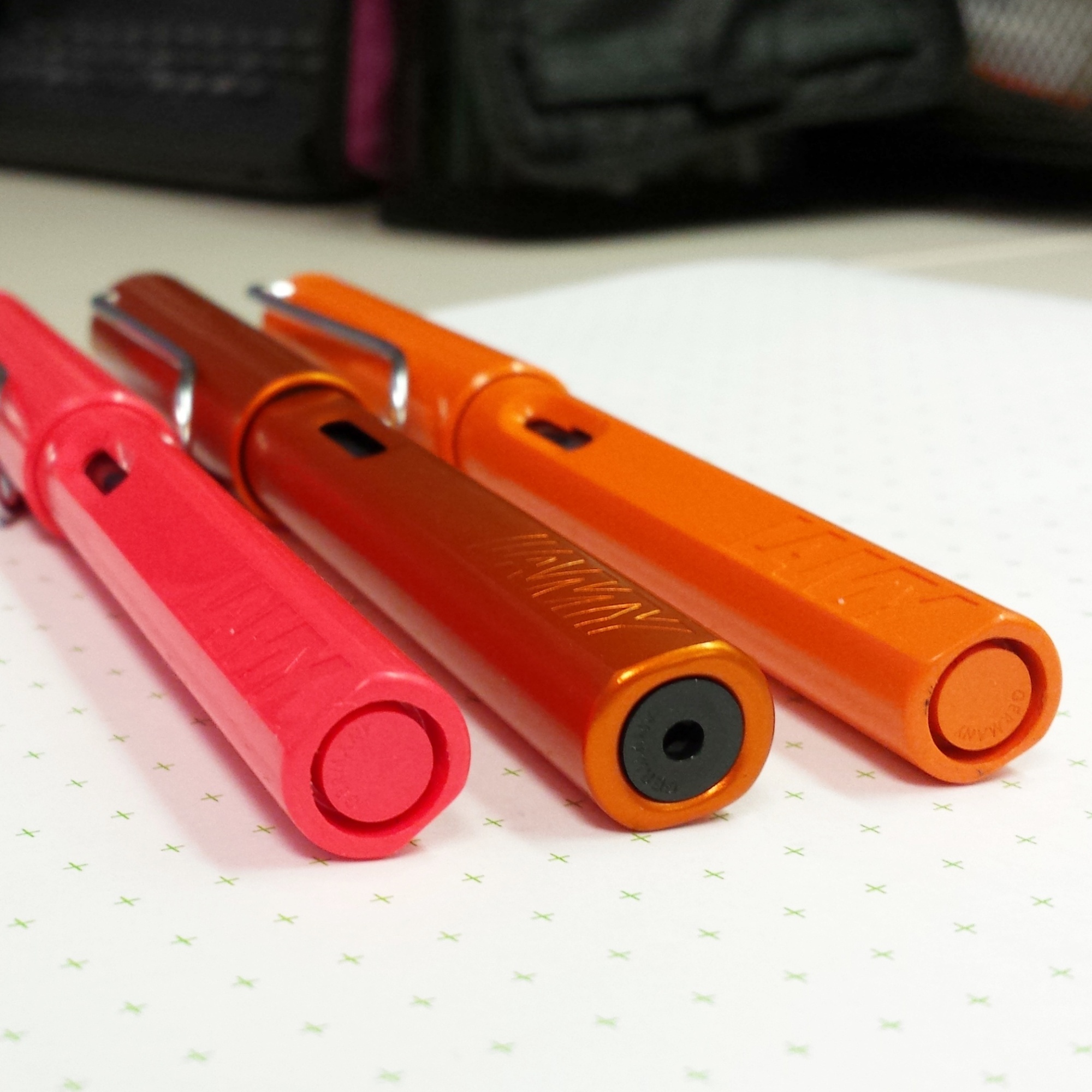 Conclusions: I adore this new pen. The shiny metal aluminum finish really adds a special warm glow to this copper color that instantly made it a new favorite.

If you’ve used Lamy Al-Star fountain pens before, it’s exactly as you’d expect in terms of performance and reliability. Yes, these Al-Stars are a little more prone to scratches in the aluminum finish as compared to the ultra-durable Safari plastic. But I’m used to that, some scratches from everyday use – at least in my case – are inevitable really. If I was worried I’d put it in a roll up case that protects each pen individually, but that probably won’t happen. My pens are well-loved and well-used.

Regardless, if you’ve been on the fence about this pen, go get it as soon as it comes available – you won’t regret it!! It will be in high demand once discontinued, just like the Orange Safari is now.

Now for more pics, but this time with GLITTER. 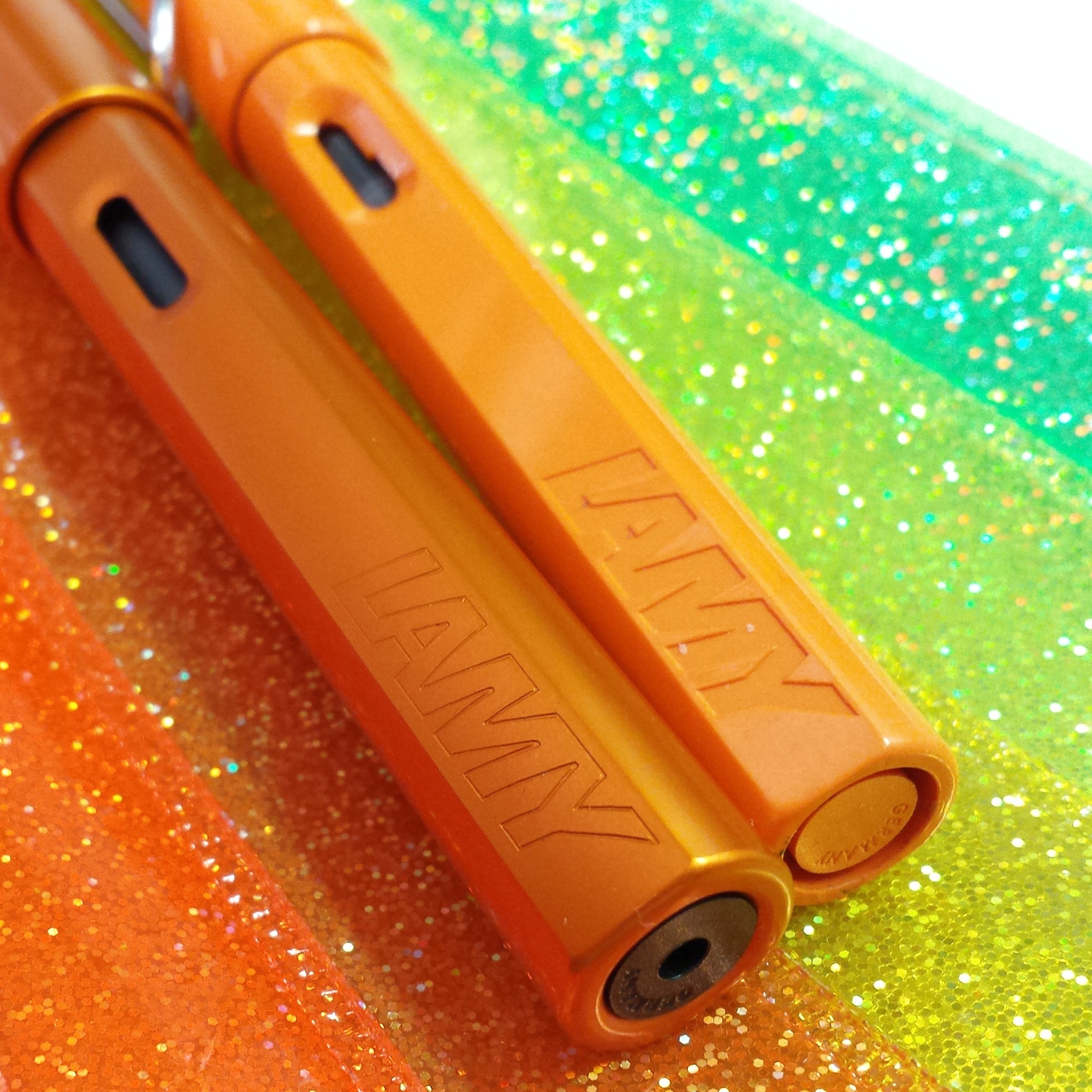 It is SO BEAUTIFUL. AND COPPER. AND ORANGE. This glorious pic was taken by kmpn.blogspot.com – check out their blog post for more.

Real-world pics of the droolworthy 2015 Copper Al-Star, thanks to Appelboom Pens‘ Instagram post!! Seriously, how AWESOME does this color look!? 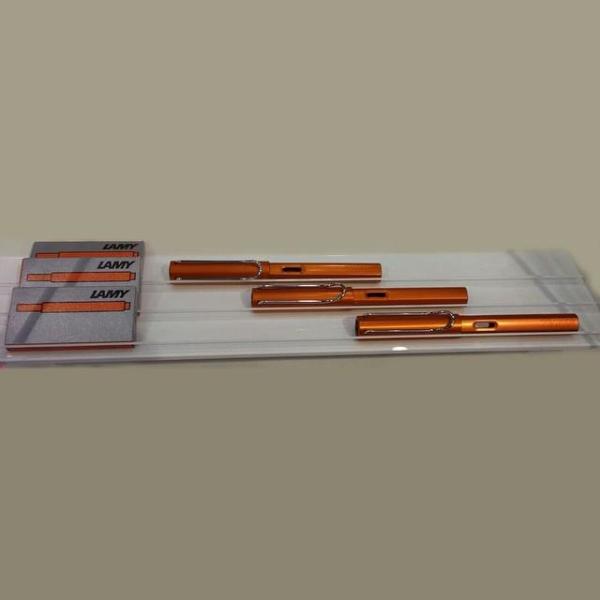 OMG I SO WANT ONE! Some other fun pics I found online:

Also, I’m not usually into Filofax planners, but hot damn this Copper Gold color is GORGEOUS: 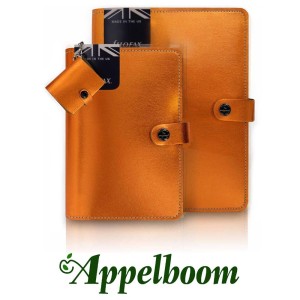 I like orange. A LOT. This love for orange is not often understood. To me, it’s bright, happy, warm, more full-flavored than yellow, not as in your face as red. Orange is pretty much the girl next door of the color wheel.

Anyways, I therefore have an addiction to orange office supplies. See what I collected just from stuff on my desk at work not too long ago? 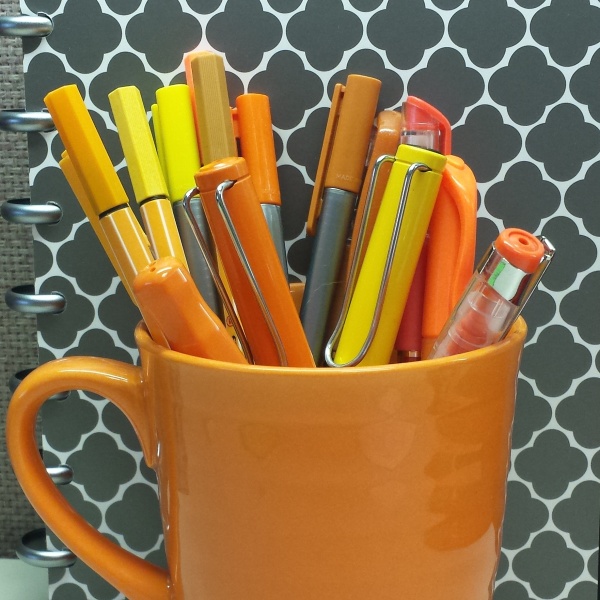 Seriously, every time I see this pic I have that ‘Pocketful of Sunshine’ song playing in my head.

So you can imagine how excited I am to hear that the 2015 Limited Edition Lamy Al-Star color will be copper orange. Yes, there are already two versions of orange Lamy Safaris (three if you count the historical Terracotta), but nothing in the Al-Star’s matte aluminum finish. 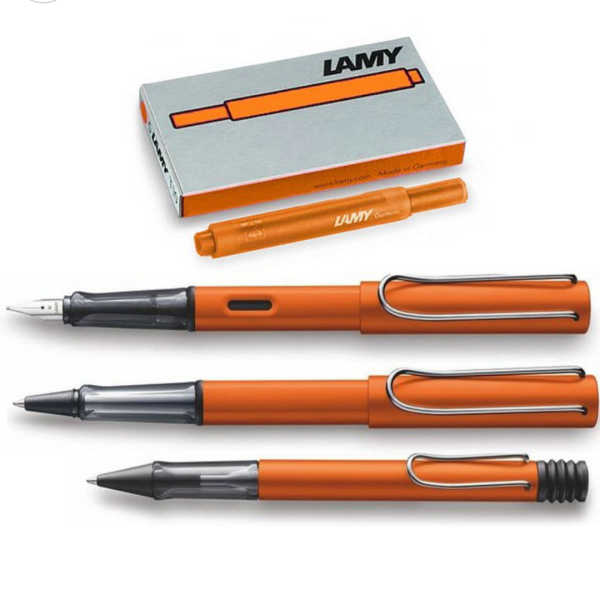 I mean, how AWESOME do these look!?! I SO WANT ONE.

Apparently they are available right now for pre-order from Fontoplumo.nl. I just wish Lamy would get it’s act together and offer a Limited Edition Safari in the much desired purple. But alas, rumors are that it will be a Neon Green. Which… REALLY LAMY?? Yes, I grew to love the Neon Yellow and Coral, but… I have serious doubts.

Because the Lamy Al-Star Bluegreen and Turquoise Quo Vadis Habana look pretty together!

Come on Lamy, we need purple!

Recently bought the Hero clone of the Lamy Safari, aka, the “Fauxfari” (credit goes to somebody online I can’t remember haha), and it’s okay. It was affordable, writes very smoothly, but is a noticeably different quality from the regular Lamy line. When taking a picture of the whole collection, it really highlights why a purple color is needed! Come on Lamy, what gives?

I love how my coffee-colored Lamy Al-Star matches this awesome pen case from JetPens. I love this pen case! It’s perfectly purse-sized. As for the Lamy color, I really love this pen too! In the right light it does look like a coppery brown. Not as much as I’d like, cause a true copper metallic Al-Star would be Awesome. This is a light coppery mid-brown. 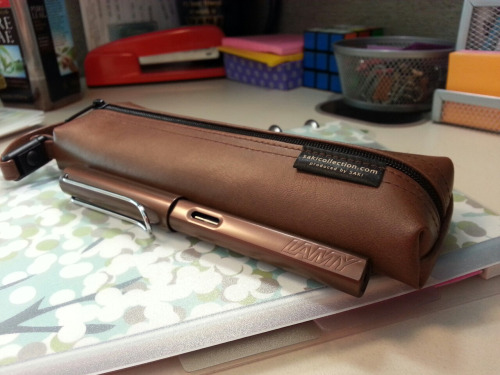 All content, text and photos in this blog are copyright of the author and may not be used or reproduced without express permission. All downloadable templates are for individual use only and may not be resold or distributed in other ways.
Follow Calvin Was Right on WordPress.com