We were in New Orleans for the first time ever recently, exploring the French Quarter for Halloween a few days before we embarked on a cruise. I LOVE the look and feel of NOLA – my inner architecture geek was fangirling like crazy. Of course, I had to google to see if there were any pen or paper shops in the French Quarter, so we found ourselves heading to Papier Plume:

Once inside, we found the staff super helpful and informative, willing to let us try and hold all sorts of fountain pens they had on display.

So, here’s a universal truth. As soon as you buy something really exciting, you’ll find something else even MORE alluring. This is because the universe is a cruel cruel temptress. She KNOWS I just spent way too much money this month at the Colorado Pen Show (on my current Preciousss, the Visconti Van Gogh Portrait in Blue pen). And she also knows abalone/mother of pearl shell pens are my weakness, and then throws THIS beauty at me:

The pen above is shown on a Franklin-Christoph 3-Pen Case in purple silk, which I was also majorly drooling over.

Anyways, the Rebecca Moss pen reminded me a lot of the Retro ’51 Cioppino LE Fountain Pen (another review here), which I’d always loved the finish of, but never liked the style of the Retro fountain pen line. Whereas the Moss pen had a much better and simplified style and look that appealed to me.

I mean, we’d literally spent money a few weeks before at the Pen Show, and were currently spending whatever remained while on vacation. The sales clerk let me play with it and take pics, and said the Rebecca Moss pens were now discontinued so weren’t widely available anywhere else. I left the store with a cheap $30 glass dip pen and some ink instead, but couldn’t stop thinking of it.

Once back from vacation, I had to Google Rebecca Moss pens, and discovered there’s really not any info out there on them! The closest review or blog post or anything I could find was this review of a rollerball pen with the same finish. Even the domain name, http://www.rebeccamoss.com, was now available for sale.

I’d been secretly hoping the hubby would buy it and present it to me at Christmas or as some future gift (since I kept going on about it, and he’s good about picking up on those hints haha). But then one day at he called me up at work, and was all, ‘well, I tried to order it, but the guy at Papier Plume said he’d literally just sold it and shiped it out the week before.’ Apparently someone had seen my pics on Instagram, and sent one it to the store, all ‘I want to buy THIS pen!’. So, that was disappointing news indeed. Since by then, even though it was utterly ridiculous, I’d kind of thought of it as “my” dream pen.

And then I opened THIS on Christmas morning!! 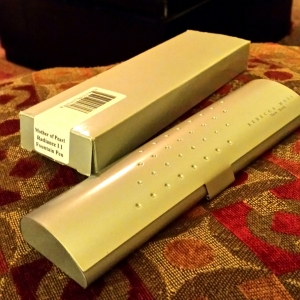 The Christmas pen has a nice hard metal case. 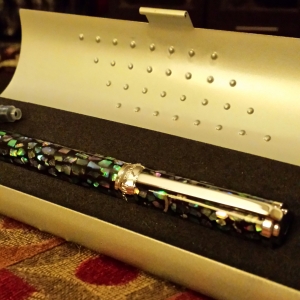 But … HOW!?? Well, my husband, all gleeful about my complete shock, told me that once Papier Plume told him they’d sold the pen we saw, he stayed in contact with them, and that Patrick at the store did some research and contacted his network of fellow pen shop owners, and FOUND ANOTHER now discontinued mother of pearl Rebecca Moss pen at a shop in New York. He had it shipped to NOLA and then my hubby purchased it from there to surprise me on Christmas morning. I am so thankful that Patrick took that extra initiative to help my hubby find this pen, the store doesn’t seem to have any presence on Twitter or Instagram, but maybe they will see this blog post one day. If they do, THANK YOU THANK YOU! You have earned loyal customers in the both of us, and I can’t wait to visit your store again the next time we are in New Orleans.

It writes beautifully too, a nice smooth medium line. 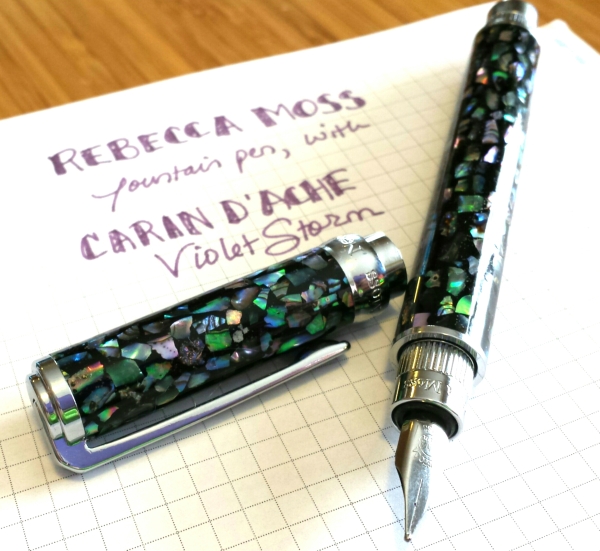 Such a beautiful shell finish! Very rare in fountain pens.

The only downside was the inside of the cap was rusting and flaking pretty badly. 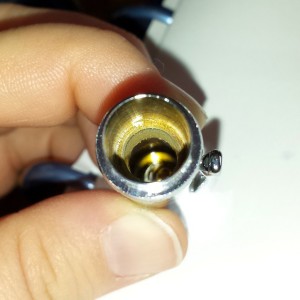 The rusted inside cap of the Rebecca Moss fountain pen.

And because the cap was magnetic, the rust and flakes were getting pulled down to the nib section of the pen, where they accumulated every time the pen was capped.

So, since the pen was discontinued and Rebecca Moss was no longer around, I wasn’t sure how to replace the cap if needed. So I’d have to see if I could treat or stop the rust somehow, and wondered if clear nail polish would work. I immediately asked my trusty network of fountain pen geeks on Instagram, and got some sound advice on how to clean the cap first with alcohol and let it dry thoroughly, then either put a couple of coats of clear nail polish on it, or try some mineral oil to stop the rust. Not wanting to risk getting oil on the nib, I decided to try the nail polish method. 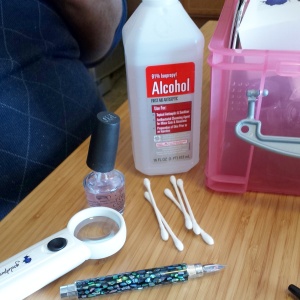 Using Q-Tips and alcohol, we cleaned out all the rusty grodiness from the cap, and put a couple of coats of nail polish around the rusted areas, letting it dry thoroughly. I’m not sure how long it will last, or if I’ll need to reapply in the future, but so far it seems to be working!! I’m just happy it was only the cap that was rusting and not the nib section, which wiped right off and showed no other signs of rust. So yay! Pen emergency has been resolved, and now I can go back to posting pics of how gorgeous this pen is!

All content, text and photos in this blog are copyright of the author and may not be used or reproduced without express permission. All downloadable templates are for individual use only and may not be resold or distributed in other ways.
Follow Calvin Was Right on WordPress.com